< PreviousFrom Banking to Country Music: Real Client Pursues Passions in Retirement, Wins Awards
Next >You may not be the best person to do your taxes 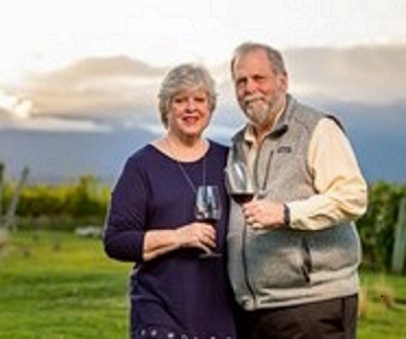 By Anna Banks of The Advocates

Today’s post is part of our series, Retirement Renegades. We aim to highlight real clients who have found purpose and passion later in life.

We found out today that one of our clients is perhaps The Most Interesting Man in the World. His name is Conrad Johnson, and he is the managing member, sales director, and chief winemaker for AWI wines.

AWI is an acronym; it stands for “A Wild Idea”. When asked how to pronounce the name he said, “I don’t care – just try my wine!”

Conrad’s enthusiasm for his second career is contagious. His motivation? It’s fun. No matter what we discussed, it always came back to fun, and he’s having plenty of it.

Conrad, who I assumed was a native Texan, is no such thing. He was born and raised in Venezuela by his parents who moved there in the 1950s, his mother from “deep East Texas” and his father from Boston. Mom eventually won out when Conrad’s father retired, and they made Houston their home. He left Venezuela at 13 to attend prep school in New England. From there he went to Louisiana to study pre-medicine at Tulane University but ended up with a business degree. He moved to Houston and went on to get his MBA  where he started to work in public accounting.

Though Conrad was not what you would call a “natural accountant”, his career was successful and afforded him opportunities to work around the world: from Madrid, Spain, where his youngest daughter was born, to Mexico and other Latin American countries. He even spent five years commuting weekly between Houston and Mexico City.

Jill, Conrad’s wife, and their three daughters have always been constants in his life, offering love and support despite the itinerant nature of his career. And he needed their support to be able to achieve what he did, having changed employers and locations several times. He’s worked for “nearly the full alphabet” of accounting firms, BDO, PW, PwC (Price Waterhouse Coopers), EY (Ernst & Young) and UHY.

In 2008, he purchased a small vineyard in Argentina with four varietals: Malbec, Merlot, Cabernet Sauvignon, and Viognier. Argentina, he says, is a place easy to fall in love with and not just because of their exceptional soccer team. Having now seen photos of the vineyard I can indeed confirm that it looks like a slice of Heaven.

In this first foray, he adopted what he called a “Blue Bell” mentality: “we’ll make the wine to drink it ourselves and sell the rest”. For those unfamiliar, Blue Bell Ice Cream famously used the slogan “We eat all we can and sell the rest”. He would own the land, make the wine, and use it as a “great thing to talk to his clients about, other than accounting or control issues”.

In 2014, Conrad and his investors looked for a way to commercialize the venture. He established AWI Winery here in Texas which allows him to import his wines and sell directly to consumers and restaurants. You can explore his offerings at awiwines.com.

His winery has become his man cave, so to speak, where he goes to work, make his annual farming and winemaking plans,  and, of course, do the never-ending accounting. He travels to Argentina once or twice a year, taking investors and friends along for the ride as he can.

One of those annual trips is what he calls a “blending trip”. I learned today that you can call a wine by its grape varietal if it’s 85% or more of that varietal. The blending trip is like a mad science trip. They taste and experiment to see if additional wines should be added to the main varietal.

I also learned that the vintage of a wine is from the year the grapes were harvested, not the release date of the wine. The grapes he is using today will be fermented in steel drums and placed in wooden barrels to age. Eventually the wine is bottled and then it ages more. The wine he makes in 2022 won’t be available to ship to Houston until approximately 2025.

The future of AWI looks bright. In addition to holding regular tastings and events, AWI submits its wines annually into the International Wine Competition at the Houston Livestock Show & Rodeo and other regional wine competitions.

AWI’s 2020 “Mitad | Mitad”, a blend of Viognier and Chardonnay, recently won a gold medal and was Class Champion in the Rodeo’s wine competition. These winnings gain them entry into the “Best Bites” competition at NRG Stadium in February where three to four thousand people come each year to taste award-winning wines, food from local restaurants and have a great time. If you plan to attend the event make sure to look for AWI wines.

Conrad thinks of these wines like they are his children. He struggles to name a favorite, but concedes that his red blend, a Bordeaux blend, is exceptional and pairs well with beef tenderloin. I mention that I’m making Beef Wellington for Christmas dinner, and just a few hours later, he’s in my office, dropping off a bottle for the meal.

I admit that I’m a wine novice. For people like me, his advice is simple. Don’t get accustomed to drinking the same wines, over and over. Try things! Everyone loves Cabernet Sauvignon and hates Merlot, but Merlots, he insists, are some of the best wines in the world. For the record, he blames the 2004 film Sideways for the decline in merlot sales around the world.

Conrad doesn’t feel like he’s retired. He does something everyday, like a job, it’s just more fun. Not that he’s expecting a paycheck. “You know how to make a small fortune with a vineyard?”, he quips, “Start with a large one”.

Nevertheless, his advice to those nearing retirements seems solid: “spend as much time thinking about your retirement activities as you do about your money before you retire!”  According to Conrad, you need your own activities. Don’t rely on your spouse, they’ll want their own activities too. In short, “Without activities, your wife will probably suggest you go back to work or kill you!”.

It seems the answer to a meaningful retirement is to have a passion for something. And fun, always have fun.  AWI has given Conrad that in spades. He relishes being able to share his wine, the farming and winemaking experiences, Argentina, and the people.  “The people you meet”, he says, “the places you go are… tremendous”. And Jill is happy to see him working on something that brings him joy.

I hang up the phone with two key thoughts: 1) this guy is NOT bored, and 2) I better hustle to the front and get my wine before someone else takes it.

Get some award-winning wine from AWI! Order online at awiwines.com.

For those who want delivery outside of Texas, please visit https://www.awiwines-os-tx.com/.