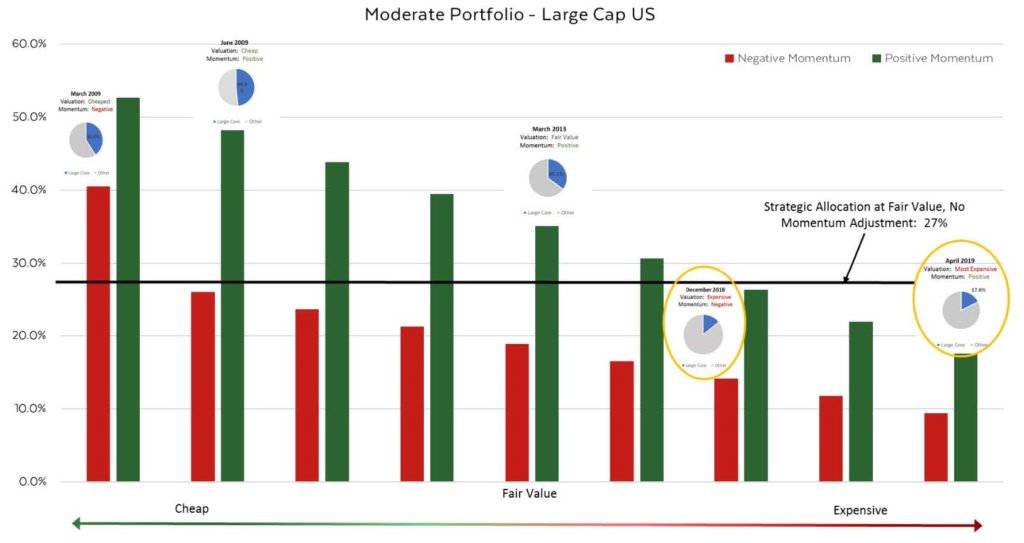 By Kurt Box of The Advocates

Before we move into a deeper explanation of the trades that occurred for our clients in the first quarter we’d like to quote ourselves!  It’s pertinent here because the trade itself might not be intuitive at first.  Last quarter we wrote:

“When things are not working, whether it’s our specific strategy or, like this year, investments in general, every instinct tells us to act, and the longer we resist that urge the more difficult it becomes. It’s completely normal to feel this way, and we as advisors experience it too. However, we also understand that while intuition can serve us well in some areas, in the investing world, emotions and instincts are not just unhelpful, they are typically wrong. What underlies long-term investment success, as proven over decades and even centuries, is a well-founded discipline that provides a framework for consistency.”

Intuition was certainly not the basis for the trade made the week of April 5th!  Valuation and momentum were the catalysts.  Below is a brief explanation of how momentum and valuation interact as it pertains to your portfolio and your allocation to Large Cap US Stocks, Small Cap US Stocks, Foreign Developed Stocks and Emerging Market Stocks.  We realized that many of you are not fully familiar with how our investment process plays out in real time and with respect to your portfolio so hopefully this will be of some value.  However, we also understand that this is a complex topic and thus will likely warrant a more robust conversation and presentation during one of your sit-down meetings.  The asset class I’ll be discussing is Large Cap US Stocks but understand that the exact same methodology is deployed to the other three growth asset classes.  So, without further ado…

The Trade:  Prior to April 5th our allocation for Large Cap US Stocks was as follows from most to least aggressive:

This was because late last year they were in the upper 70’s in terms of valuation (0 is cheapest and 100 is the most expensive) AND they were also negative with respect to momentum.  In the table above, you’ll notice the column titled “Strategic Allocation Based Only On Valuation”; this would have been the allocation if we did not take momentum into consideration at all.  However, you’ll notice the Actual Allocation during the first quarter was 30% below the Strategic Allocation.  This was the negative momentum factor at play.

However, during the first 3 months as the stock market rallied, valuations climbed back up into the 80’s and then hit 90 at almost the same time momentum turned positive (which was near April 5th).  This resulted in the following:

The graphic (below but also larger in Appendix 1) shows allocations to Large Cap US Stocks for a Moderate Portfolio at actual points in time.  The two dates circled in yellow are December 2018 and April 2019.  Here you can see the slight increase from 14.2% (the red column below the graph) to 17.6% (the green column below the graph). 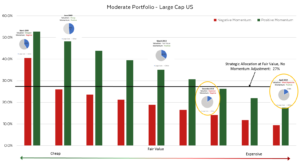 To state again, we reset our valuation parameters each month as one new month of earnings comes in and one month drops off the back of the 10 year average.  Momentum is simply traded as it occurs (details can be discussed with your advisor).

“81% of U.S. companies that went public reported losses in the 12 months before their initial public offerings, matching the high-water mark set at the height of the dotcom bubble.”  Hadi Taheri

“I remember a little boy listening to a concert at a Fourth of July celebration one year. As the music played, the little boy waved his arms as if he was conducting the orchestra. Monetary authorities (our FED the European Central Bank etc.) are a lot like that, except that everyone who watches these kids at play actually believes that they are, in fact, conducting the orchestra.  Come on now. Give the U.S. economy, its millions of workers, and its entrepreneurial spirit some credit.”  Dr. John Hussman

“Investors are prone to two opposing but equally debilitating fears: the fear of missing out when times are good, and the fear of loss when markets are volatile. These two fears have a zero-sum relationship with rational decisions. The more you are dominated by these fears, the less rational you are.

So what can we do, as investors, to move toward maximum rationality? Here’s one piece of advice: Turn off the TV.

We rarely turn on business TV in our office. Stock market movements throughout the day are completely random. The same actors that are influencing the up-and-down ticks of individual stocks–actors whose goals and time horizons may have nothing in common with yours–are driving market movements. I feel for TV producers who must provide a continuous narrative to explain this randomness.

Business TV presents additional dangers to your rationality: It reprograms you to think about the stock market as a game. In encouraging you to play that game, it puts you at risk of nullifying all the research you’ve done, as you let your time horizon dwindle from years to minutes.

It also threatens to strip from you the humility that is so needed in investing. Business TV guests who provide their opinions on stocks have to project an image of infallibility (the opposite of humility). Again, I sympathize with them – they are there to market themselves and their business, and thus they must project the image that they have an IQ of 200, holding forth on every possible topic.

You are never going to hear from them the words that are the essence of investing: ‘I don’t know.’ Being unable to admit uncertainty is dangerous, because it may cause you to stop thinking about investing in terms of probabilities. If you start thinking that the future has only one path, you may ignore other paths and thus other risks in your portfolio construction. If you tell yourself that you’re an expert on every company, then your circle of competence has no boundaries and your overconfidence may take you to places (and into investments) where you have no place being.

Also, since “I don’t know” is not part of their vocabulary, business TV guests will confidently answer questions that should never be asked, such as “What will the economy and stock market do next?” If you have been investing long enough, it is hard not to develop opinions (hunches) about what the stock market and economy will do next. However, good money managers work diligently to extinguish these hunches from their investment process, because those hunches lack repeatability.

If you get the next leg of the stock market or economy right, that’s just dumb luck – nothing more and nothing less. Economic and stock market behavior, especially in the short term, are very random. God forbid your recent forecasting success goes to your head, because your ability to predict what will come next is not much different from your predicting the next card to be turned up in blackjack.”  Vitaliy Katsenelson

Of course, it must have been not 5 minutes after reading Vitaliy Katsenelson’s article that I decided to check CNBC to see if it happened to confirm his fears at that very moment.  It did not let me down as you can see from the following screen grab (next page).  Thankfully, according to the below, stocks will be up 7% on April 18th 2020 😊. 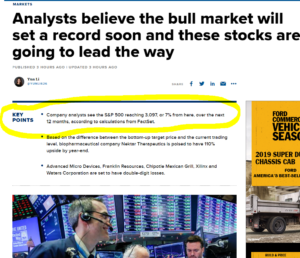 As always, we appreciate your trust and welcome questions. 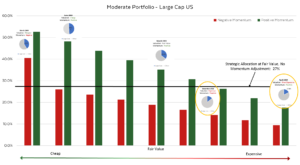