< PreviousDownsizing, 5 Years Later: Any Regrets?
Next >Being 30 Then and Now 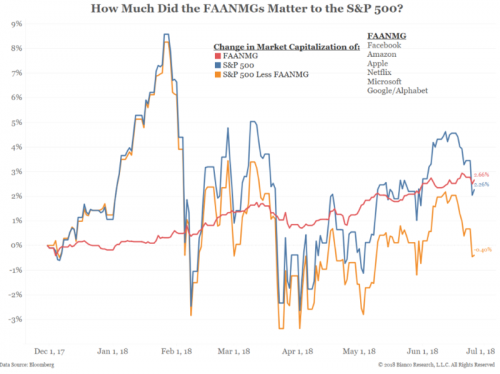 Our Investment Mission is to help families live their values by earning a consistent, long-term rate of return in excess of inflation as required in their wealth plan.

Mini cycles and trends exist in every Bull Market. Most of them not recognizable until after the fact. As we continue up what is now the 2nd longest Bull Market in post-WWII history, we’re able to see (with hindsight) that one major trend has played a crucial role in distorting US market returns during this Bull Market, Growth vs. Value.

You might be wondering what I mean by Growth vs. Value. All stocks that make up the US S&P 500 Index are defined as either Growth or Value stocks. The US S&P 500 index will hold both and be considered a core stock fund that does a decent job at representing the health of the US stock market, or at least that of the largest 500 US companies. However, when you split the index into two separate groups, defined by either Growth or Value companies, there tends to be a noticeable difference between the performance characteristics of each depending on the current market environment, market cycle, and investors’ appetite for risk. We can use Investopedia for a quick reference of the key differences in Growth vs Value stock:

Back to our Study and a look at FANGs

So how much did investing in either Growth or Value matter over the course of the current Bull Market? Apparently, quite a bit. Especially so when you consider that in a capitalization-weighted market index (the S&P 500), the biggest companies are over-weighted, and only become even more over-weighted as their stock values continue to rise.

Certain material in this work is proprietary to and copyrighted by Litman Gregory Analytics and is used by The Advocates with permission. Reproduction or distribution of this material is prohibited and all rights are reserved.

I pulled the following chart in Exhibit 1 from a Bloomberg article so apologies for the blurriness, but it does a great job of illustrating the point that most of the US S&P 500 performance over the last 9 years can be explained by the performance of 6 stocks! That is an incredible statistic, in my opinion. To think of this in another way, if you take the same logic and reverse it, those 6 stocks can potentially explain the negative future performance of the US S&P 500 as well. All it would take is a souring of investor sentiment for these names. Of course, we need an event or two to happen and time for a cascading sell effect, but patience is always a key principal of successful investing. In fact, now that everyone is familiar with the term FANG, who else is left to buy more of these overpriced Growth stocks? 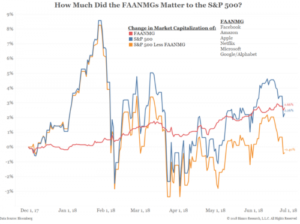 In Exhibit 1, the red line represents FANG stocks’ performance since December, 2017. Although surprisingly smoother, it matches the performance of the S&P 500 index, in blue during the sample period. The most important line to draw your attention to is the orange line, which shows the S&P 500 Index, but removes FANG stocks from the index. Performance becomes negative by a fairly significant margin!

So does Value still work?

From 1928–2017 the value premium (the return difference between Value stocks and Growth stocks) in the US had a positive annualized return of approximately 3.5%. Said another way, on average and since 1928, Value has outperformed Growth by 3.5% per year. Wow! However, in 7 of the last 10 calendar years the value premium in the US has been negative. Ouch! This has prompted some investors to wonder if such an extended period of underperformance may be cause for concern. But are periods of underperformance in the value premium that unusual? Let’s look to history to help make sense of this question.

Exhibit 2 shows yearly observations of the US value premium going back to 1928. We can see the annual average for the premium is close to 5%, but in any given year the premium has varied widely, sometimes experiencing extreme positive or negative performance. In fact, there are only a handful of years that were within a 2% range of the annual average (Value and Growth returns were similar). Most other years were farther above or below the average. In the last 10 years alone there have been premium observations that were negative, positive, and in line with the historical average. This data helps illustrate that there is a significant amount of variability around how long it may take a positive value premium to materialize. 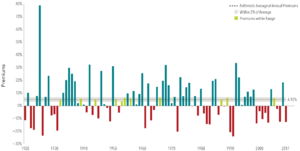 So what does all of this mean for investors? While a positive value premium is never guaranteed, the premium has historically had a greater chance of being positive the longer the time horizon observed. Even with long-term positive results though, periods of extended underperformance can happen from time to time. Because the value premium has not historically materialized in a steady or predictable fashion, a consistent investment approach that maintains emphasis on value stocks in all market environments may allow investors to more reliably capture the premium over the long run. It may just be a matter patiently awaiting the coolling of FANG stocks, for the “long-run” to become a reality of the present. In the meantime, we continue to overweight value stocks with an emphasis towards global equities and away from US equities.

As we pause to reflect at the midpoint of the year, it seems so far 2018 has served as yet another reminder to investors that over the short term, markets are driven by innumerable and often random factors that are impossible to consistently predict. In the first quarter, US stocks experienced their first major losses since 2016 and a return to more “normal” market volatility. Many market prognosticators speculated that this could indeed be the end of the nearly decade-long US bull market.

Fast-forward through three more eventful months and this time around US stocks have been the net beneficiaries, gaining 3.4% on the back of a surging dollar while the rest of the world has slowed. The dollar’s 5% appreciation translated into a meaningful return headwind for dollar-based investors in foreign securities as foreign currencies depreciated against the dollar. Developed international stocks fell 1.8% and European stocks declined 1.6% for the quarter. EM stocks fared the worst, dropping 9.6% in dollar terms.

In bond markets, the benchmark 10-year Treasury yield pierced the 3% level in May, hitting a seven-year high. Yields then fell back, ending the quarter at 2.85%, an 11-basis-point increase from the prior quarter-end. As such, the core investment-grade bond index had a slight loss for the quarter and remains in negative territory for the year to date.

We did not make any shifts in our Asset Allocation this quarter. However, we did take the opportunity to trim our profits in XOP (SPDR S&P Oil & Gas Exploration & Production ETF) and shift the proceeds towards underweight asset classes. This move took place on May 24th, 2018 after XOP experienced a roughly 43% move higher in less than a year, since August, 2017.

It was a difficult quarter for our equity holdings given the jittery investment climate outside the United States, particularly in the emerging markets. EM stocks, and most every other equity asset class, bolted out of the gates in 2018, with an additional 11% return through late January. Since then, however, these holdings have declined sharply, and returns are now in negative territory for the year.

The selloff in EM stocks appears to have been driven by a combination of investor concerns about:

These macro developments, in particular the risk of a US trade war with China and the rest of the world, are indeed risks to EM stocks, at least in the shorter term. However, these are not new risks, nor do we believe they overwhelm the attractive fundamentals, valuations, and potential longer-term returns of EM stocks. Based on our analysis, we find that emerging markets are fundamentally better placed today than in past cycles. The sector composition of EM indexes has changed meaningfully over the past decade, from traditional heavy-cyclical industries like materials and energy to more growth-oriented technology and consumer-driven sectors that are less sensitive to shifts in global growth. Evidence also suggests EM stocks do fine when interest rates in the United States are rising as long as global growth is solid (real GDP growth is expected to be above trend again this year). As to the underlying fiscal health of EM economies, emerging markets, in aggregate, have much better debt coverage than in the late 1990s/Asian crisis era. Additionally, most EM countries now have floating rather than dollar-pegged currencies, which should help release pressure in these economies and reduce the likelihood of a currency devaluation–driven crisis. 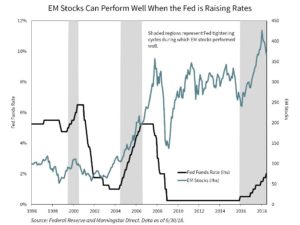 On the fixed-income side, our portfolios were helped once again by our allocation to floating-rate loan funds. In aggregate, these funds contributed positively to quarterly portfolio returns and outperformed the core investment-grade bond index, as has been the case over the past several years.

The performance of our Stabilizers were mixed but slightly negative in the second quarter. Our Market Neutral, Managed Futures, and Multi-Asset Managers, which make up our Stabilizer sleeve, outpefromed most equity indices, but underperformed most fixed income. Once again, supporting its’ name, Stabilizers.

We remain confident in the positioning of our globally diversified portfolios, which we believe are structured to perform well over the long term while providing resiliency across a range of potential short-term scenarios. Should the current trade tensions resolve, and the global economic recovery continue, we expect to generate good overall returns, with outperformance from our European and EM stock positions, active equity managers, and floating-rate bond funds.

Alternatively, should a bear market strike, our portfolios have “dry powder” in the form of lower-risk Defensive and Stabilizers that should hold up much better than Growth. We’d expect to put this capital to work more aggressively following a market downturn by reallocating to US equities at lower prices with higher expected returns sufficient to compensate us for their risks.

Thank you for your continued confidence and trust.—The Advocates (07/16/18)