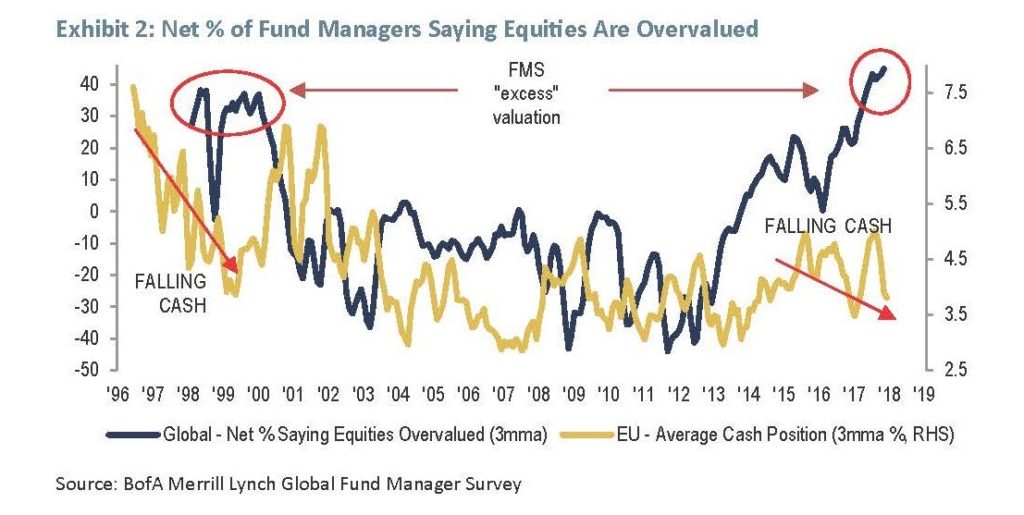 By Kurt Box of The Advocates

Investment Mission Statement (IMS): To accomplish your life goals by earning a consistent, long-term rate of return in excess of inflation as required in your wealth plan.

If you’ll recall, the third quarter commentary was titled “The Calm Continues….”; that came to an abrupt end on Tuesday January 30th.  More can be found on 2017 below (below “2017 In Review”) but let’s quickly address the recent volatility and spectacular overvaluation of the US stock market.  It is precisely this overvaluation that allowed for the volatility.  Think of it as going farther and farther out on a limb that will eventually break.  Each step that is slightly askew leads to greater unbalance.

What is possibly the most interesting aspect of any large under or overvaluation is how investors handle it.  The two charts below focus on “professional” investors; i.e. money managers, mutual fund managers, pension fund managers and so forth.   Exhibit 1 indicates that we now have the highest level of those saying the US stock market is excessively valued EVER.  However, and this should stun you, Exhibit 2 indicates that those same mangers are very much overweight in equities!  This is classic FOMO (fear of missing out) which is better known as greed.  That these are professionals makes it even more egregious. 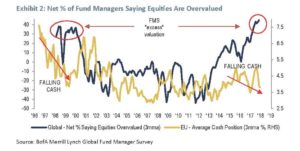 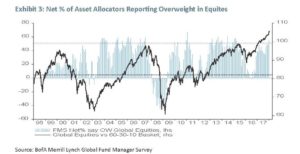 You may wonder how and why we can be so confident in saying that the US stock market is significantly overvalued and thus offers poor 8 to 12 year return prospects.  The reason is that the methodology we use to calculate fair value works and works well and has been a strong predictor of future returns.  The following chart is the correlation of various valuation ratios with actual subsequent S&P 500 total returns from 1950-2017.  To put it in somewhat plainer English, the higher the correlation, the better the measurement is able to predict future returns.  Anything over 0.80 is extremely high.  CAPE stands for “cyclically adjusted price to earnings ratio” and is the current price of the S&P 500 divided by the average 10 year trailing earnings and can be updated each month (i.e. Shiller’s CAPE).

We use something similar to the the margin adjusted CAPE as we adjust CAPE up or down per levels of infllation.  The market has historically been more richly priced during periods of low and stable inflation (median of 21.2x) than periods of deflation (15.6x), or high inflation (13.0x).  However, the one you’ll hear about on Fox Business and CNBC is the Fed Model which is the markets forecasted earnings yield divided compared to the 10 year Treasury Bond yield.  It is said when they are equal the market is fairly valued, when it is positive (i.e. E/P is higher) it is cheap (the higher the E/P the cheaper) and when it is negative it is expensive.  For example, at an index level of 2,800 and forecasted earnings of $130 the earnings yield would be 4.64% compared to a 10 Year yield of 2.85% means the market is cheap (this is around where we are today).   Unfortunately, as you can see, it doesn’t work.  In fact it literally tells you nothing about future expected returns.  Why?  Because as we’ve stated many times stocks are not a claim to next year’s earnings, but to a very long-term stream of cash flows that will be delivered into the hands of investors over decades and decades.

Critics of value investing, that is using reliable value measurements to determine when the market is cheap or expensive, have complained that these reliable measures have been extreme for years now and should therefore be disregarded.  Aside from the fact that our measurments indicated the market was at fair value during 2013 and only hit extreme levels last May, it’s important to remember to distinguish between valuation levels themselves (which are extreme) and the mapping between those levels and longer-term market returns.  The mapping has remained intact, even over the last two market cycles.  It’s essential to remember that while valuation levels are highly reliable predictors of prospective long-term market returns (i.e. 10-12 years) they are pretty much useless over shorter segments of time. 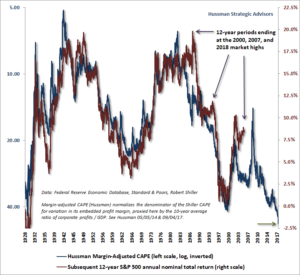 No asset class changes took place during the 4th quarter.

2017 In Review
The fourth quarter capped yet another stellar year for U.S. stocks. This was the ninth consecutive year of positive returns for the index—tying the historic 1990s bull market and capping a truly remarkable run from the depths of the 2008 financial crisis. The broad driver of the market’s rise for the year was rebounding corporate earnings, which was supported by solid economic data, synchronized global growth, still-muted inflation, and accommodative monetary policy. Markets got an additional catalyst in the fourth quarter with the passage of the Republican tax plan, presumably reflecting investors’ optimism about its potential to further boost corporate after-tax profits, at least over the shorter term.

Foreign stock returns were even stronger. European stocks’ 27% gain reflected improved corporate earnings and the strongest economic growth in the region since 2007. Chinese technology stocks, meanwhile, led global equity markets for the better part of the year, boosting emerging-market stock returns to 31% for the year.

Amid the surge in stocks, the Federal Reserve raised short-term rates three times (75 basis points) and cautiously continued the well-publicized reduction of its multi-trillion-dollar balance sheet. Investors took central bank actions in stride and were seemingly reassured by the appointment of Jerome Powell as the next Fed chair late in the year. Intermediate-term interest rates changed little during the year with the benchmark 10-year Treasury yield ending at 2.5%. Corporate bonds across all credit qualities and maturities had positive returns, but were outpaced by the more credit-sensitive sectors of the fixed-income market. High-yield bonds gained over 7% and floating-rate loans rose 4%.

Our portfolios generated strong returns for the year, consistent with the positive overall return environment for most financial markets and asset classes. Specifically, our portfolios benefited from our meaningful exposure to European and emerging-market stocks, both of which outpaced U.S. stocks in 2017.

While our equity funds all saw impressive gains, our growth-oriented managers performed better on a relative basis than value managers, and larger-cap investors outpaced their smaller-cap peers. We are confident our diversified active manager lineup remains strong and believe our value-oriented managers (who have faced a relative-performance headwind versus the broad market index during most of the post-financial-crisis period) will be rewarded once this growth-oriented cycle turns, as it historically has.

Certain material in this work is proprietary to and copyrighted by Litman Gregory Analytics and is used by The Advocates with permission. Reproduction or distribution of this material is prohibited and all rights are reserved.

In terms of the near-term macro outlook, the consensus view favors a continuation of the in-sync global growth environment we saw in 2017. The new corporate tax cuts should also fuel more share buybacks from corporations, which has been a significant contributor to higher stock prices over the past nine years. Most of the professional investors and investment strategists we respect seem to share this view.

However, the fact remains that we are on the heels of the longest rally in 90 years of U.S. market history. By any number of metrics, U.S. stocks appear overvalued, with a lot of optimism baked into current prices. While earnings will probably see a boost in the short term under the new tax plan, over the long term we expect the incremental margin benefit from lower taxes to largely be competed away. The new tax plan’s additional incentive for companies to pursue capital expenditures could also increase shorter-term economic activity, boosting overall profits. But this would come at a time when we are in the later stages of the business cycle, when the economy arguably is running close to full employment. This may create inflationary pressures and/or cause the Fed to raise rates faster than communicated, both of which may counteract the benefit from rising profits. Suffice it to say, at present we believe the range of outcomes factored into our scenario analysis adequately captures the recent corporate tax cut’s potential benefits for U.S. equities.

On the other hand, we continue to see more runway for foreign stocks. Europe continues its economic recovery within what appears to be a benign fiscal and monetary environment. Earnings have rebounded strongly, with European corporate earnings growth surpassing that of U.S. companies over the past 12 months. Likewise, emerging markets are experiencing a rebound in corporate earnings growth, and, importantly, are becoming less dependent on commodity-oriented sectors as technology and consumer sectors have assumed greater importance. While these investments aren’t table-pounding in absolute terms, their potential returns are still meaningfully more attractive than what we expect from U.S. stocks.

This period continues to be a challenging one because of the disconnect between market levels, interest rates, different stress points in the global economy, and the sizable impact of central bank policies. Overall this is a combination of influences that should keep any sensible investor from being overly confident about how things will play out in the near term. We focus on the more realistic goal of sticking to our investment discipline and only taking on risk when we believe it raises our portfolios’ return potential without materially increasing the potential downside.

As always, we appreciate your confidence and welcome questions.

Thank you for your continued confidence and trust.—The Advocates (02/20/18)