< PreviousCosts of Living
Next >Enjoying Your Tomorrow - Today 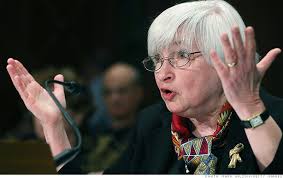 For the benefit of my kind readers, I will interpret what Janet Yellen, Chairman of the Federal Reserve, said in her speech today at the monetary policy symposium sponsored by the Federal Reserve Bank of Kansas City, in Jackson Hole, Wyoming:

What Janet Actually Said:  “in light of the continued solid performance of the labor market and our outlook for economic activity and inflation, I believe the case for an increase in the federal funds rate has strengthened in recent months.”

What Jane Really Meant:  We kind of missed the earlier boat.  The case for raising rates was really better in 2014, but our bad, we missed that one.

What Janet Actually Said: “Of course, our decisions always depend on the degree to which incoming data continues to confirm the Committee’s outlook.”

What Jane Really Meant:  We are kind of like a deer stuck in the headlights.

What Janet Actually Said:  “As ever, the economic outlook is uncertain, and so monetary policy is not on a preset course.”

What Jane Really Meant:  We think we know what we are doing, but we sure are having trouble lighting a fire under this thing, so who knows when the next move will come.

The soundtrack to Janet’s speech:  The Clash, “Should I Stay Or Should I Go?”