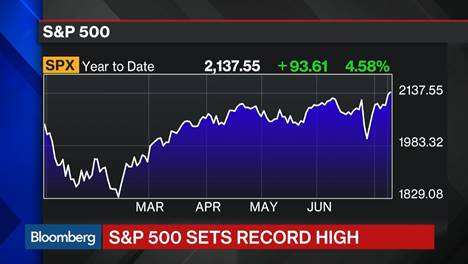 We’ve waited more than a year for the market to get back to where they were before the downturn this January, before Brexit, before a lot of uncertainties in the last 12 months.  The market top itself is an uncertainty; after all, many investors regard market tops warily.  When stocks are more expensive than they have ever been (so goes the thinking) it may be time to sell and take your profits.  However, if you followed this logic and sold every time the market hit a new high, you’d probably have been sitting on the sidelines during most of the long ride from the S&P at 13.55 in June 1949, which was the bull market high after the index started at 10.  New highs are a normal part of the market, and it is just as likely that tomorrow will set a new one as not.  In fact, overall, the market spends roughly 12% of its life at all-time highs.

We all know that the next bear market will start with an all-time high, but we can never know which one in advance.  Market highs do not necessarily become market tops.  Let’s see if we can all celebrate this milestone without the usual dose of fear that often comes with new records.