< PreviousThe Dark Night: North Korean Strategy
Next >How Much Do You Have In Foreign Bonds? Probably Zero. 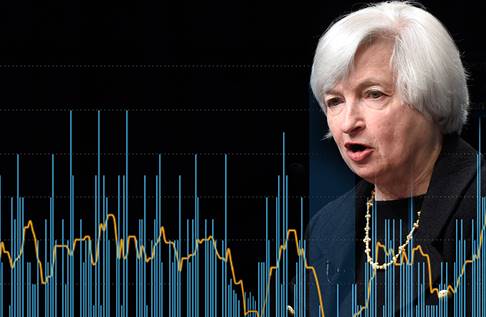 Janet Yellen gave a speech at the New York Economic Club today.  I wish she hadn’t.  It was not the kind of speech that generates confidence in the Fed, or their handle on the rudder of the U.S.’s economic outlook.

“The future path of the federal funds rate is necessarily uncertain because economic activity and inflation will likely evolve in unexpected ways.”

“One concern pertains to the pace of global growth, which is importantly influenced by developments in China. There is a consensus that China’s economy will slow in the coming years as it transitions away from investment toward consumption and from exports toward domestic sources of growth. There is much uncertainty, however, about how smoothly this transition will proceed and about the policy framework in place to manage any financial disruptions that might accompany it. These uncertainties were heightened by market confusion earlier this year over China’s exchange rate policy.”

“A second concern relates to the prospects for commodity prices, particularly oil. For the United States, low oil prices, on net, likely will boost spending and economic activity over the next few years because we are still a major oil importer. But the apparent negative reaction of financial markets to recent declines in oil prices may in part reflect market concern that the price of oil was nearing a financial tipping point for some countries and energy firms. In the case of countries reliant on oil exports, the result might be a sharp cutback in government spending; for energy-related firms, it could entail significant financial strains and increased layoffs. In the event oil prices were to fall again, either development could have adverse spillover effects to the rest of the global economy.”

“What is certain, however, is that the Committee will respond to changes in the outlook as needed to achieve its dual mandate.”

It certainly does not sound like we are masters of our own domain.